How It All Started

A simple yet revolutionary idea in the early ‘80s led to the creation of Better Bodies. It all started in the city of dreams.

New York City in 1982 was a city of contrasts. Uptown versus downtown was one of many. 23rd street seemed to be the ”border” between two very different cultures. Below 23rd street, outliers and artists were repurposing empty storefronts into punk palaces and warehouses into art houses. Rents, by today’s standards, seem mythic. You could move to downtown Manhattan with little more than a backpack and score an apartment and a job in a week. Artists flocked to the city, transforming it into a dream factory. 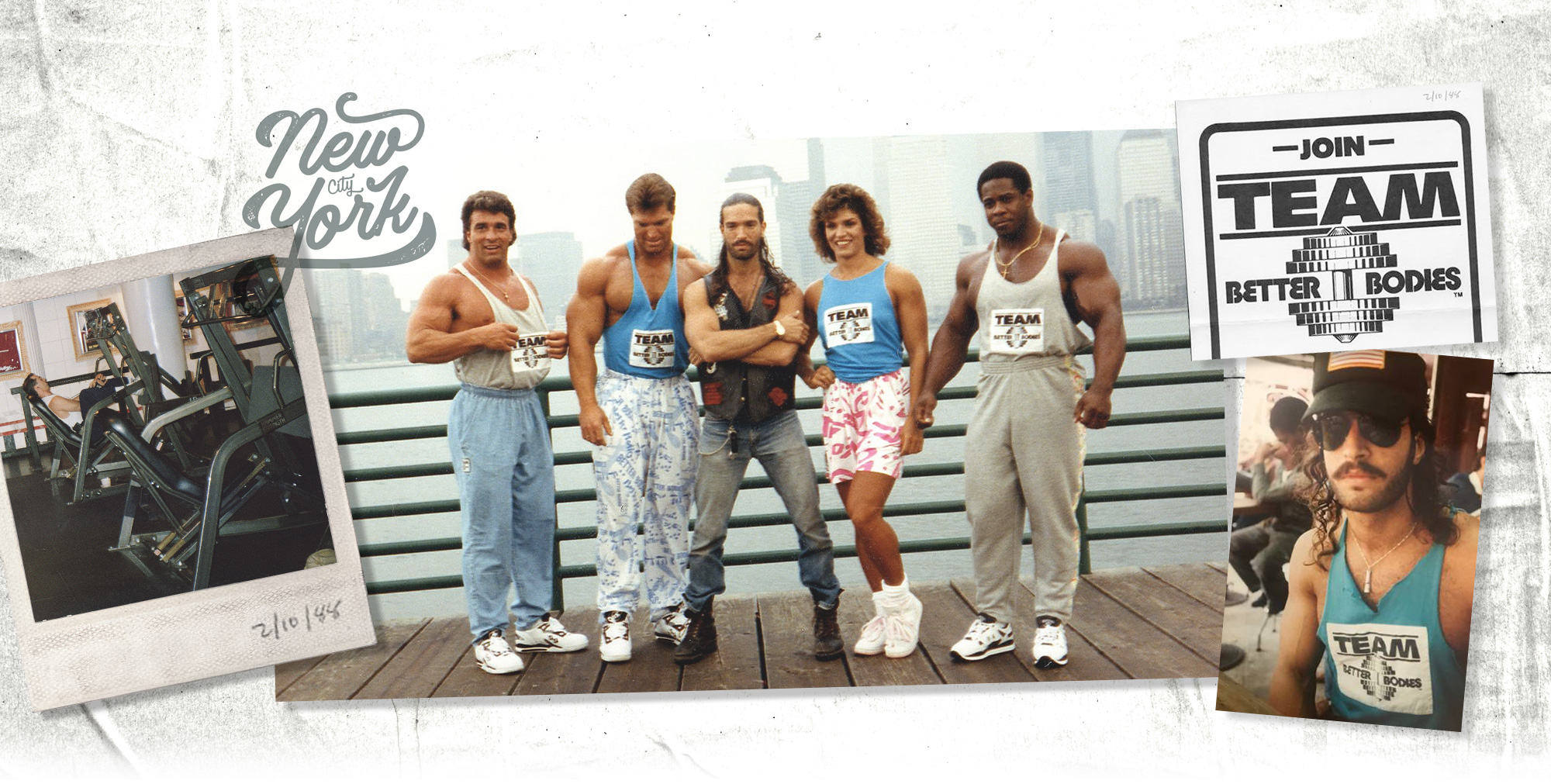 The New York fitness scene seemed to reflect the same de facto border, fancy health clubs uptown, hardcore men’s gyms downtown. Women were often confined to health clubs and aerobics studios. The only place where the two sexes could train together was at health clubs, which often served as little more than a place to chat rather than train. At the time, Better Bodies founder Brian Moss worked at the American Museum of Natural History. “I was an instructor. I gave school children tours through the museum.”, says Moss. He trained at a men-only gym, he loved the hardcore nature of the gym, but something was missing.

”He wanted to open a hardcore gym, a REAL gym, that welcomed everybody equally.”

While sitting at his desk at the museum during lunch breaks, Moss spent his time sketching out his thoughts on a “new” gym concept. He wanted to open a hardcore gym, a REAL gym, that welcomed everybody equally. A place where women were not only allowed but were truly welcome. While that may seem normal today, at the time, the idea was radical. The benefits of strength training were only just being discovered by women. In 1982 in the era of leg warmers and jazzercise, having muscle wasn’t considered “feminine”. He knew they were out there – women that wanted to train hard. Women that wanted to be strong. Brian Moss believed they were overlooked and needed to be included. Not seeking to be treated differently, but rather, equally.

After months of back-of-the napkin notes, Moss finally had a logo sketched on a piece of stationary. He then saved, borrowed, and begged for $60,000 to open Better Bodies. Moss then found an affordable 4,000 square feet location in Manhattan’s “Flatiron District”, known for its large turn of the century industrial spaces. On a hot August day, him and his training- and business partners; Mike Alalof and Ben Rodriguez, rented a box truck and drove to Matty Ferrigno’s gym in Brooklyn. The elder Ferrigno (Lou’s father) had been building and selling equipment from the gym’s basement. Moss and his partners picked out the basics; squat rack, power rack, bench press, barbells, and dumbbells. Just the essentials. At 12 West 21st Street on Labor Day of September 1982, Better Bodies Gym flung its doors open.

“These were people that came from very different backgrounds and places, but we were all equals when we wore gym clothing.” – Brian Moss

It was Moss’ goal to create an atmosphere of inclusion, a gym without judgement. Among the early gym members there were artists, DJs, writers, poets, bodybuilders, musicians, office workers, fashion designers, producers; people from many different tribes and different walks of life. “These were people that came from very different backgrounds and places, but we were all equals when we wore gym clothing.”, says Moss.

Like most gyms during that era, they had apparel for sale at the front desk. According to Moss “it started with the basics, T-shirt, tank top, shorts and sweatpants. Offered in black, white, and heather gray.” The design was simple, just the logo. The clothes themselves were off-the-shelf “blanks”, no special fit, certainly nothing that was made for a muscular physique. Nothing like that existed at the time. But Moss had a solution: scissors. “I often cut the T-shirts into tank tops. Everybody wanted me to cut their shirts. I had a technique where they turned out just right.”

”All the notable bodybuilders and serious fitness celebrities of that era visited Better Bodies when they were in town; Lee Haney, Ronnie Coleman, Dorian Yates…”

Around the New York fitness scene, wearing a Better Bodies T-shirt meant you were serious, you were part of a NEW tribe and people wanted to be part of Better Bodies. All the notable bodybuilders and serious fitness celebrities of that era visited Better Bodies when they were in town; Lee Haney, Ronnie Coleman, Dorian Yates, and many more. The apparel may have been basic, but the professional bodybuilders got something special not offered to the public: their shirts got a custom patch sewn on that marked them as part of TEAM Better Bodies. The addition of the word ‘TEAM’ to not only the Better Bodies logo but to bodybuilding itself was a unique and notable creation. “When you’re on stage competing, you’re by yourself, but everything leading up to that moment takes help from other people. Training partners, friends, lovers, family, even the person at the front desk of the gym, they’re all a part of your team.”, Moss tells. The ‘TEAM’ graphic was silk screened onto bits of scrap fabric, and Moss had a friend’s grandmother hand-sewing them onto already-existing Better Bodies apparel. Today, every fitness brand seems to have a ‘TEAM’ associated with it, but that all started with the original: Team Better Bodies. By initially limiting the ‘TEAM’ patch to the pros, Moss was “priming the pump, before releasing the concept to the public”.

”Around the New York fitness scene, wearing a Better Bodies T-shirt meant you were serious, you were part of a NEW tribe…”

It’s possible that the Better Bodies brand might not have ever achieved the success it did without the first-ever hire at the gym: Gladys Portugues. “She came in one day with an acquaintance as we were building out the gym, I don’t think she was even looking for a job. It was serendipitous, fate maybe.”, says Moss. At the time, Portugues was already working as a trainer at an uptown health club. She was unknown in the fitness industry, but Moss spotted something special in her. Within a year of hard training she booked her first magazine spread, and more quickly followed. Any time Portugues had a photoshoot or guest posing appearance, Moss would make sure she was wearing some Better Bodies apparel. According to Moss, “as her popularity rose, so did the popularity of the brand. She was one of the catalyst’s for the brand’s popularity.” Portugues graced the covers of Flex, Shape, and Muscle & Fitness, which was a feat rarely achieved by a woman. Her appeal eventually crossed over into the mainstream, with photo spreads in magazines like Vogue. Gladys Portugues eventually left her position at Better Bodies and went on to marry Jean-Claude Van Damme, but her mark on both the Better Bodies brand and fitness industry remains; she helped make women with muscle acceptable.

”Regardless of your sex, color or creed, if you trained hard and loved the gym, Better Bodies was your team.”

Soon, phone calls and mail orders for apparel started coming in from all over the US. It quickly became apparent that Brian Moss hadn’t just opened a gym, he had started a movement. Regardless of your sex, color, or creed, if you trained hard and loved the gym, Better Bodies was your team.

None of the adventures Moss enjoyed when he conceived Better Bodies were planned. He and his team were young and fearless and New York rewarded it. Fondness for the gym and its clothing remains wide and deep today. Moss, who became a popular bodybuilding photographer after selling the gym in 1997 considers its success charmed. “It was a magical time.”, says Moss wistfully.

If you want to know more about Brian Moss, visit http://www.brianmoss.com

More in Behind the Seams

Show All
Feel free to provide any description you would like related to current problem. It will help us with further investigation of this problem.